Catalogue of Archives (other than photographs) currently held.

Note: This is an ongoing project and this list will inevitably increase

– Advertising Huwood Products (Undated)
– Annual Conference Agenda 1981-82 NUM
– Annual Conference Agenda 1975-76 NUM
– Back to the Land (2000) – Pictures by Young People of the Garw
– Blackmill – A Postcard History
– British Regional Geology 1948
– British Coal Mining Explosives – Jones Taylor, P.F.Gay 1938
– Church Records – English Congregational Church Pontycymer. Membership details from 1898 to 1962 (presented by Mrs Craider)
– Church accounts for above from 1952 to 1964
– Coal and the Coalfields of Wales by F.J.North 1926
– Coal Dust Research Committee 1940
– Coal Dust Research Committee (9th Report) 1943
-Coal Mining: Report of the Technical Advisory Committee 1945
– Coal Mines Act 1911
– Cym Garw – A collection of records from the last century – including the Collection receipts for the Noddfa Chapel; the story of the Rev John T. Griffiths and Cefn Gelli Farm; programmes for the Cor Cym Garw and much more.
– Explosives – Safe Storage and Conveyancing by Road – ICI 1966
– Explosion at Cambrian Colliery- HMSO 1965
– Face Support in Steel and Light Metal – De Fritz Spruth 1951
– Fuel : Solid, Liquid & Gaseous by J.S.Brame 1942
– Gases, Heat and Dust in Mines – K.Neville Moss 1927
– Geology of the South Wales Coalfield Part VI 1904
– Handbook of Track Laying for underground haulages 1953
– Handbook on Shotfiring in Coal Mines – NCB 1952
– Handbook of Electric Arc Welding- NCB 1958
– Haulage and Winding – Granville Parker 1935
– High Explosives and Propellants – S.Fordham 1966
– Home Office Report about the Lluest Colliery Explosion to the House of Commons – dated October 1899
— Garw Valley and its Collieries (presented by Mr E.J. Morgan)
– Guide to Health and Safety in Mines 1958
– Land Reclamation Report for Lluest Colliery site (A4 file)
– Land – Photographs by children from the Garw (1991)
– List of members of the Geological Society of London for the years 1949,1952 and 1983
– List of Standard Seam naming and equivalent Local Seam 1956
– Man Riding Underground by Rope and Locomotive 1954
– Mechanical Stokers for Shell Boilers 1952
– Memoirs of the Blue Bell Choir by Will Roberts (Conductor)
– Mine Atmosphere – W.Payman 1930
– Mining Explosives – R.McAdams & R.Westminster 1958
– Mine Gases and Gas Testing 1919
– Mining Law and the Deputy – NCB 1960
– Ogmore Valley and its Collieries (presented by Mr E.J.Morgan)
– Official Guide to the Ogmore & Garw Urban District circa 1951
– Official Lluest Colliery Explosion Report (1899)
– Organ Design Specifications & Quotes for English Congregational Church dated 1906.
– Pioneers of the Welsh Coalfield – Elizabeth Philps 1925
– Practical Coal Mining – Boulton – Volumes 1 – 6
– Proceedings S.Wales Institute of Engineers 1955
– Process Equipment Design – Herse & Rushton 1964
– Port Talbot Railway by S.Richards (Donated by P.Broadbent)
– Practical Shot Firing Training Manual No 6 – 1951
– Reminiscences of Life in the Garw Valley by Wyn Price and Rod Jones(1988)
– Rent Cards for 31 Heol Llangeinor for 1940 & 1954 (Maurice Gould)
– 32nd Report on Safety in Mines 1953
— Report of Coal Augers USA 1953
– Royal Commission on the Coal Industry 1925
– Safety Handbook for Mobile Cranes – NUM 1967
– Safety and Health in Mines – NUM 1950
– Safety in Mines Research Board 11th Annual Report 1932
– Safety in Mines Research Board Paper 61 (The support of underground Workings in the Coalface in the North of England) 1930
– Site Investigation Report for reclaiming the Lluest Colliery site (BCBC 2002)
– Schedule of (Coal) Prices for the Garw Valley District by Alderman John Thomas (dated October 1902)
– Shot Firing in Mines 1952
– South Wales Coalfield 1946
– South Wales Miners – R.Page Arnott 1967
– Steel Supports in Mines Updated
– Stemming Materials No 84 by J.Britson 1934
– Surface Air Compressors (Reciprocating type) 1955
– Text Book of Geology – Philip Lake 1919
– The control of Dust in Mines 1959
– The Installation and Moving over of a Face Belt Conveyor 1952
– The Miners – A History of the Miner;s Federation in GB 1889-1910 by R.Page Arnott dated 1949
– The Miners – R.Page Arnott 1953
– The Miners in Crisis and War – R.Page Arnott 1960
– The Miner’s Ready Reckoner (Belonged to Garibaldi Davies who worked at the Ocean Colliery, and was killed in WW1.) Presented by John Davies.
– The Operation of Longwall Cutting Machines Training Manual 1954
– The Quarterly Journal of the Geological Society of London 1955
– The Ropeman’s Handbook (thought to be 1952)
– The Support of the Roof at the Coal Face Training Manual 1953
– The Support of the Roof in the Roadway 1954
– The Vale of Neath Railway by S.Richards (Donated by the late P.Broadbent)
– Time Measurement Part 1, F.A.B.Ward 1936
– Track Layout Diagrams of the GWR and BR (Tondu and the three valleys Branches) Section 49A by R.A.Cooke (Donated by the late P.Broadbent)
– Transactions: Institute of Mining Engineers Sept 1951
– The Young Valley – A History of the Church in the Garw Valley by Rev M.M.Davies. This also gives an insight in to Richard Price’s origins. (Kindly donated by Mr Neil Sutton).
– Vertical Shaft Sinking – E.O. Forster Brown 1927
– Welsh Valleys – Maesteg & Tondu Lines. Details of all the local stations and railways in the Garw, Llynfi and Ogmore Valleys. Published by Middleton press in Oct 2011. (Kindly donated by Middleton Press).

– Heritage Railway development pictures on CD (Brian Shears)
– Peter Blacklaw’s 3 songs recorded for the Garw Grammar School Reunion in Nov 1993. (I married a Garw Girl; Grandfather’s Lamp and I don’t want to be young again).
– Major Ben Duggan’s Memories of a child growing up in the Garw Valley recorded in 1984. (Kindly donated by Mr David Jordan).

– An aerial tour of the Garw valley taken from a Helicopter
– Copies of Maps & Documents and Photos Incl Garw Collieries, Llangeinor Parish Records
-New Train delivery on 8/6/09 for the Garw Valley Railway Company.
-The “Garw Guru” charter train run up the valley – the last passenger train, on 5 April 1997.
-The Last Coal train to leave the valley dated 6 March 1997.
– Copies of all current pictures shown on the photographic archive index on separate DVDs

– Copies of letters from the NCB Chairman (Ian Macgregor) dated June, July and August 1984 to members of the NUM.
– 2 Envelopes for Original Letters (without the contents) sent to Welsh Guardsman Joseph E.Carpenter, a POW in Stalag 344. One original letter from Miss G. Allen to the same POW sent from Bridgend Hospital. Dated 1944. They are of interest because they are marked with the label of the Official Censor, and Miss Allen’s letter is written on the specific cover provided for sending letters to POWs and shows Carpenter’s Prisoner of War number.
– An original letter sent to the MP E.J.Williams from Duncan Sandys (Minister of Defence) concerning POW Joseph Carpenter’s incarceration in Stalag VIII.b dated 16 June 1942. This alludes to the difficulties being experienced in Germany of getting Red Cross Parcels to Prisoners of War. The letter refers to a request from Mr E.Carpenter (Joseph’s Father) who lived at 7, Queen Street, Blaengarw for information regarding his son.. (See also Newspaper cutting listed below).
– An original Airletter sent to Trevor Llewellyn of 32 Herbert St Blaengarw from E.I Llewellyn in Bahrein. The date is not known, but the stamp indicates a 3 Anna Indian Postal Service stamp showing King George VI and is over printed BAHREIN. The contents describe a parade of Arabs celebrating some particular event or religious ceremony involving sword beating and flagellation. It is a remarkable account but, unfortunately, the letter is only pages 4,5 & 6 of a larger letter.

­­-Copy of the Glamorgan Gazette article, dated 18 Feb 1898, which describes ­­the opening of the Port Talbot branch of the Llynfi Railway from Pont-yr-hyl to ­­Port Talbot.
­­-Copy of the South Wales Gazette dated 23 June 1990, in the series called “­­Valleys Picture Past”  (Although there is no reference to the Garw Valley).
­­- Copy of “Heroes of Coal”  South Wales Echo supplement dated March ­­­1995.
­­- Copy of the pages from the Glamorgan Gazette, showing Huw Edwards ­­­opening the Calon Lan Park in Blaengarw. (1st May 2008)
­­- 2  off A4 Volumes of cuttings from local papers mainly “Valley Notes” articles ­­and pictures.
­­- Copy of the Western Mail Special Edition dated 25 April 1989 – showing ­­“South Wales Yesterday”
­­- Copies of Glamorgan Gazette cuttings from 1950 to 1964, describing  ­­­various events concerning the Garw, Porthcawl and Llynfi railways.  A ­­­fascinating account of their openings, closures, and sundry notable stories. ­­(Donated by the late P.Broadbent).
­­- Cutting from the Glamorgan Gazette (thought to be dated June 1942) ­­­relating to Joseph Carpenter’s letter to his parents (who lived at 7 Queen ­­­Street, Blaengarw) regarding the problem of not receiving Red Cross Parcels ­­in his Prisoner of War camp.
­­- Cutting from (presumably) the Glamorgan Gazette, undated, recalling the ­­life and passing of Tom Williams of Blaengarw – a renowned singer – plus his ­­medal ­from the 1911-12 Eisteddford. (N.Sutton)
­­-Cutting from the Western Mail dated 9 Dec 1985 on the closure of the ­­­International Colliery, Blaengarw.
­­- Transcript of an article from the Western Mail in Oct 1991 recalling Major ­­Ben Duggan of Bettws and Pontyrhyl (29 Sept 1908 – 25 Oct 1991).
­­- Cutting describing Mrs Jessie Wile’s 100th Birthday
­­- Letter (original) from Wm Watkins to the Headmaster Garw Grammar ­­­School dated 1956, and sent from British Guyana.
­­- Cutting showing the Carn Rovers AFC 1933-34 Winners of the ­­­­T.Farquerson Cup.
­­- Copy letter from W.C.Aston’s of Oxford Street, Pontycymer, dated 3 Sept ­­1929, as a reference for Hetty James.
­­- Copy of a poster advertising the First Annual Drama Competition Oct 1939.
­­- Copy of a poster publicising the New Mutuality Club of the Pontycymer ­­­Industrial Co-Operative Society in Oxford Street.

8. Other Paper Records and Certificates

­­- Certificate of Appreciation for Doris John from the inhabitants of the Garw ­­Valley Committee regarding her service in WW2.

­­- Garw Valley Ratepayers Assoc. Poster for Beryl Williams’ re-election as ­­­Councillor. Dated 4 May 1972.plus cutting from the local paper describing the ­­effects of her election in beating the incumbent Labour Councillor.

­­- Official Opening of the Mary Kathleen Uranium Mine (Australia) 1958

­­- Selection of booking letters and suppliers’ invoices for Fire Service Dinners ­­at the Squirrel Hotel Pontycymer, and the Dunraven Arms Hotel in Bridgend ­­between 1960 and 1964 (N.Sutton). Particularly interesting in view of the ­­­charges at the time.

­­- The Consolidisation of of Floor Dust on Mine Roadways 1951

­­- List of papers from Jack’s Cafe in Pontycymer (On permanent Loan ­­from Creation Development).

­­Handwritten Notice from the Ffaldau & Garw Lodges advising on how to claim ­­­concessional coal dated Jan 1972.­­

­­Jack Assirati’s latin Exercise Book for 1962 for the Secondary School.

­­Notice card advertising a Cavalcade of Sport on Film at Pontycymer Cinema in aid of ­­the 33 Boys Club.

­­Programme for the Cor Meibion Cym Garw and Mid Rhondda Silver Band concert ­­given at the Garw Valley Centre on 19 September 1992.

­­Travel Identity Card for Mr Alexander Hamilton  for travel between Great Britain and ­­Ireland. Date unreadable but thought to be 1932.­

­­List of fatal accidents in the pits of Glamorgan.

­­Pictures of the Wiles family.

­­Picture of the Coronation Party at Ffaldau Junior School

– Old plan of Blaengarw from the 1800’s showing outline plans of holdings by ­­the Dunraven Estate.
­­- Indenture (Original) relating to the lease of land from Blaengarw Farm for ­­   the construction of the  Blaengarw Workman’s Hall dated 1/12/1917.

Copies of articles can be supplied. Please contact us for more details. 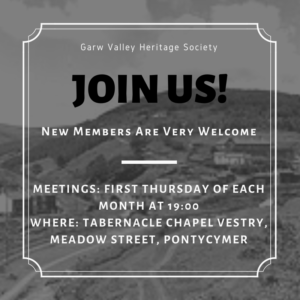 We are a group of local people who are enthusiastic about creating an archive of the Garw Valley’s industrial and social history.

We are very grateful to all those who have taken the trouble to write in and who have given us stories, reminiscences and poems. These are all worth sharing, and we will be serialising some of them, with the authors' permission of course.

In turn if you have anything that you want to share, or have any queries on what has been done, please get in touch and if you want a reply, please enclose your email address or phone number.